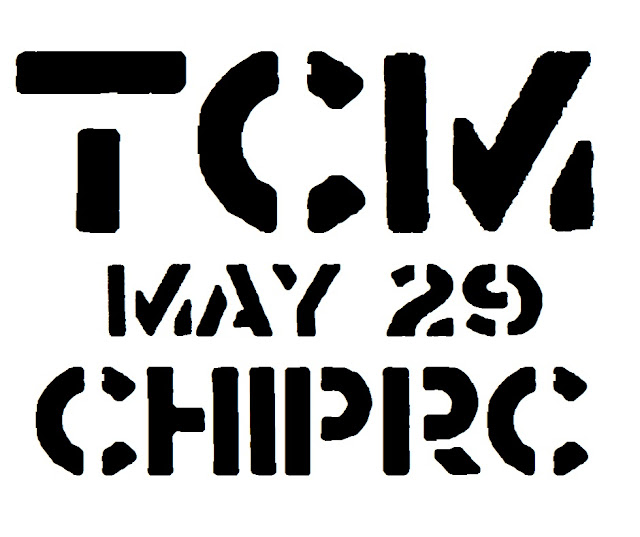 TCM is back this spring. The zine and comics friendly reading series that you can't live without is back at CHIPRC, 858 N. Ashland Ave, Tuesday May 29.

$5 at the door, includes a raffle ticket and a drink ticket.

Doors at 7, reading 730ish (or when it gets dark enough to screen comics off the wall).
Show up early to meet our guest Sunmi, chat up the all readers, and enjoy yourself.
Posted by Johnny Misfit at 1:22 PM 2 comments:

SCARY STORIES TO TELL AT TCM! 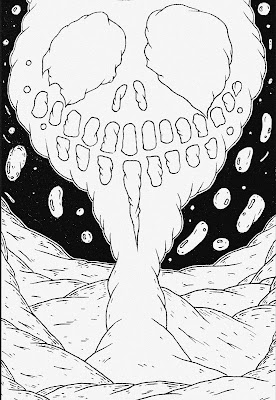 We tried this in 2015 and it was so fun we're back at it again. On Friday October 27, TCM invites you to join us again to kick off the Halloween weekend as we pay homage to a classic book series: Scary Stories to Tell in the Dark. Settle in at one of favorite haunts the Hungry Brain for drinks, Halloween cookies, and door prizes.

The highlight of the night will be some of the creepiest stories from your childhood as read by playwright Mark Chrisler, comedian Daniel Shapiro,  singer/songwriter Allyson Frazier, author of Rules of Punk Celia C. Pérez, and others. Hosted by Johnny Misfit. Chicago's zine/comics/author/poet/cookie-centric reading series Two Cookie Minimum is back Tuesday August 29th, 8pm at the Comfort Station Logan Square 2579 N Milwaukee Ave. The series held residency there each summer in 2015 and 2016 and we're excited to be back at one of Chicago's most interesting public spaces. Weather permitting, we're looking to take the event to the lawn and read to the open Logan Square.

The reading is open to the public. Donations accepted at the door to support future Comfort Station programming.
CHIPRC is a sponsor of Two Cookie Minimum. Cookie drawings on the flyer from Jan Racketz who doodled them during a pastTCM reading.

Posted by Johnny Misfit at 5:44 PM No comments:

Mere days away is the TCM 7 Year reading. Looking back, I found a lot of news clippings that promoted past readings. You can see the different styles from the Redeye, Reader, TimeOut, and Columbia Chronicle. There's at least one listing for each venue we hosted at (except for CHIPRC). It was nice to see all the readers names that made it to print.

Thanks to all the writers who published these and other promo on behalf of the reading series.
Notably thanks to the Redeye for always finding a new cookie image to run. Must have been a hard to find all the various cookies they used in these and other listings.

Enjoy this collage and see you Wednesday! 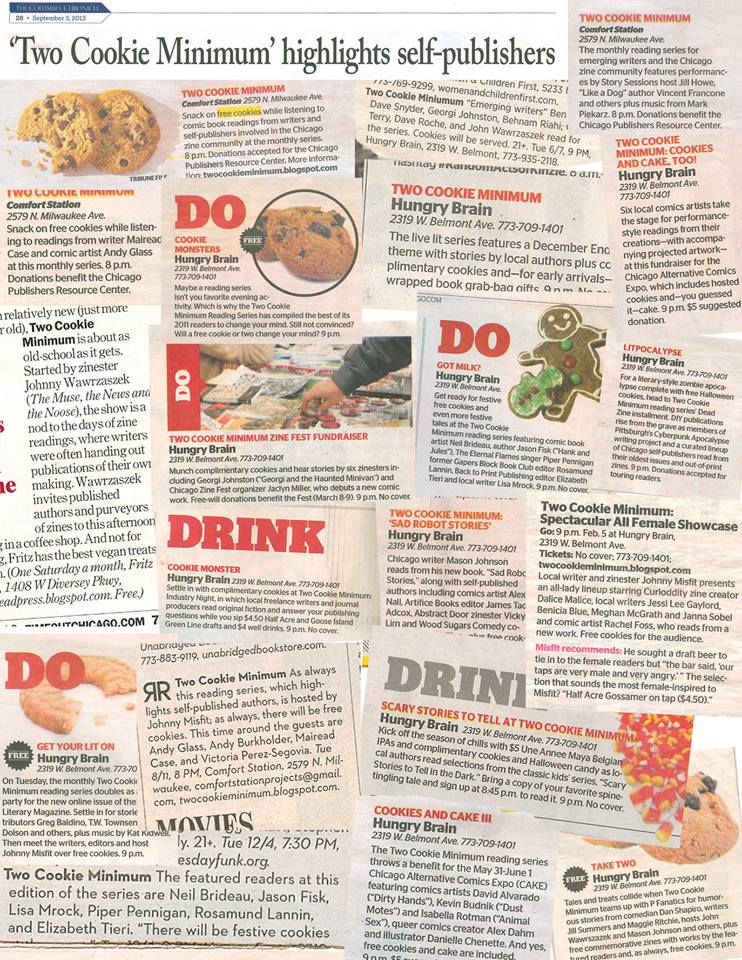 Posted by Johnny Misfit at 9:37 PM No comments:

Seven Years is in Seven Days

Think of the movie the Ring. Seven Days. As In seven days you can join us at the Hungry Brain to celebrate TCM's anniversay. Here's a quick look back for the archives of my bad memories.

In April 2012, more than 5 years ago, I invited then Milwuakee resident Keith Rosson to read at the series (here was that reading info). I remeber meeting him at the Minneapolis Zine Fest and thinking this guys funny, but why's he drinking one pint of water to ever beer?

Fast forward, he agrees to take the Amtrak to Chicago to read. I knew he was an old school zinester and that was it. He gets to the bar, basically shit talking it and the reading etc. Maybe this because I am relentless about ribbing him for living in Milwaukee or something about how he ended up there. I used to live in Roscoe Village in walking distance to the Hungry Brain, so I offed him a place to crash. Drunk and not feeling hot, I think I made the regrettable choice to go to Tonys Tex Mex on Damen/Belmont for after hours eats. We get back to the apartment. My then wife who also read is like, fuck this I'm going to bed. My then roomate is like, hey do you want to smoke weed, something he could never get me to do. All we had was red wine in the house. I cap the night off with a puke session in my bathroom. It never failed that when I had visitors from Milwaukee that I also took to Tonys for Tex Mex, I always ended up vomiting. History repeating.

Long story, Keith was a good sport. I'm proud to have booked him. Glad he's a published author with another book on the way. And stoked that Two Cookie has continued to let me make bad mistakes.

johnny misfit
Posted by Johnny Misfit at 9:07 PM No comments: 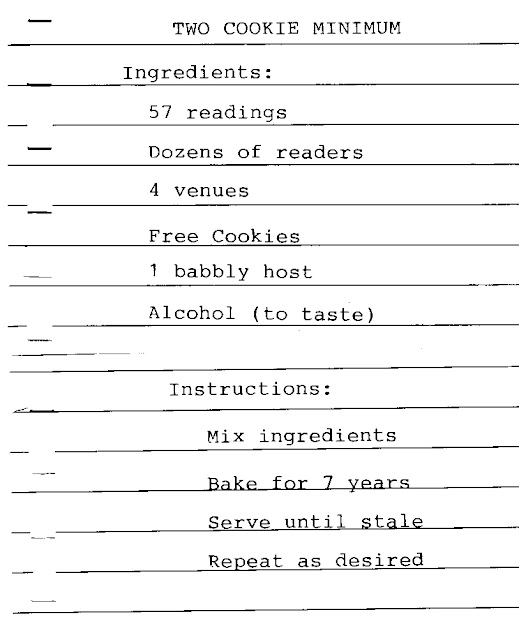 I've been doing this for seven years. Oh man, what is wrong with me. Until I figure that out, join me Wednesday, July 19th for a celebratory event.

To make this the best birthday, we whipped up a celebratory line up and are returning to our old haunt, Hungry Brain, 2319 W. Belmont.

The reading is free. Doors open at 8pm, readings at 9pm.

Get there early to grab a seat, a drink, and some cookies.
Posted by Johnny Misfit at 8:26 PM No comments: 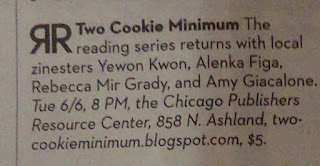 The seventh year of two cookie began and it couldn't have gone any better. I was reluctant to start another year, hoping that seven wasn't bad luck. This was the first reading in over 9 months. Its hard to take time off and immediately jump back into things. No one wants to go to work after the weekend. Kids aren't jazzed about heading to school after summer break. So would people still come out to the reading after months and so many changes these past few years? As a host, I think about these things a lot. But I felt the need to celebrate that this project I created has been a thing for seven years. When it started, I wanted to showcase great writers I saw in the communities I was part of. Those were people making zines, students in my fiction writing classes, other writers from the literary community, musicians, and maybe a few people that made comics. It was easy to gather them together when you’re providing free cookies. Over the years, the series has hosted first time readers alongside previously publishes writers. There have been a number of book and zine release shows. The reading series has supported the literary and arts community and they've supported right back. That’s what keeps me going. So if this proves to be the start of a bad luck year, bring it on. Its been a great ride and this year is just getting started.

For this first reading of the season, the variety was no different than what makes a TCM. Opening the night was Women Write About Comics contributor Alenka Figa. She hadn't read in public before, AND she never put out a zine. Well, she now can check both off her bucket list. Alenka shared a wonderfully woven narrative about caring for her cat Nova that has a rare feline disorder. At the same time, her grandmother has been receiving personalized care from her aunt. And while talking about the care of others, she reflected on the need for self-care. We can’t be there for others if we aren't there for ourselves. The chapters of her story flowed back and forth from family, to Nova, to herself in a seamless manner that was reflective of her work as a journalist, yet befittingly collected into a zine.

Amy Giacalone read second, sharing a great piece of fiction from a novel in progress. Where do we go when we die? We become ghosts that take the CTA, duh. Or so were the characters in her piece, materialized entities struggling with their afterlife. The story of how they became ghosts was vivid without seeming fantastic. Amy has a way of humanizing her characters to the point where we suspend reality and visualize their situations, back stories, and surroundings. Good fiction immerses the reader into its world, so upon leaving there is a sense of longing for more.

Next was Rebecca Mir Grady, no stranger to reading at TCM. She self-publishes a series books called She is Restless, zines w/ a spine.  The first part of her reading was a discussion about the series which thematically tackles current natural disasters and climate change issues through fold out illustrations and paintings. The second part of her reading was a look at a project in process. Beginning January 1, 2017 , she started a daily journal and is not going back to edit. She shared a glimpse into her life and her partner’s documenting their workout routines, holiday gift giving,  the start of her new job as a nanny, participating in the Women’s March, oh and their engagement! That was really exciting to see on the screen. Stylistically this was more like field notes on the life of Rebecca rather than the type of web comics that daily entries have become. It was refreshing, personal and touching. Thanks Rebecca for sharing!

Normally during a reading I’ll take a break. Tonight I figured we were on a roll so no need. I was pretty excited to announce Celia Marquis, the CHIPRC artist in residence for this summer. She’s from Montreal and the reason why I booked this reading at CHIPRC. I wanted people to see her work, meet her and expose the series to a special guest that we otherwise wouldn't have been able to invite. After a typical Johnny Misfit long-winded introduction, Celia inquired about a break. Oops. I knew I should have done this. It didn't detract from her reading, which was a dual presentation of fiction and comics. Her comic Motel La Siesta was inspired by a story her boyfriend told her about his teenage friends. Celia has illustrated a comic version of his story, where a group of boys rent a hotel room to have a party. They smoke, drink, take a dip in the Jacuzzi, invite over girls, fart, basic teenage hotel party behavior. The nuance was that the printed comic, she also included an insert zine of the full story’s text. Celia read from the text, but followed along with the comic. I hadn't seen that before and was super glad to have one person read fiction and project comics. The circle was now complete.  Celia, keep on doing this! 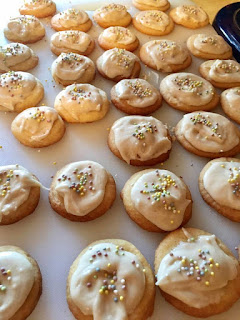 Closing the night was Yewon Kwon reading a comic she put together and printed during her internship w/ Chicago’s only risograph printing house, Perfectly Acceptable Press. The comic was about a group of friends, The International Cult of the Dank Arts of Friendship. Not to give anything away b/c you should really grab a copy, but the story was full of hilarious situations, sex, weed, and online playlists. Her performance was topped off with some audio accompaniment, a feather cape, and a small trip around the crowd on a razor scooter.  It was a perfect ender and a crowd pleaser. Great job Yewon!

A big thanks to all the readers. This was a great beginning to the season. Thanks to my wife for making some good homemade vegan cookies. Thanks to all the supporters who have allowed TCM to be a series for seven years. Check back here for info on the rest of our summer meetings.

Best,
Johnny
Posted by Johnny Misfit at 12:50 PM No comments: